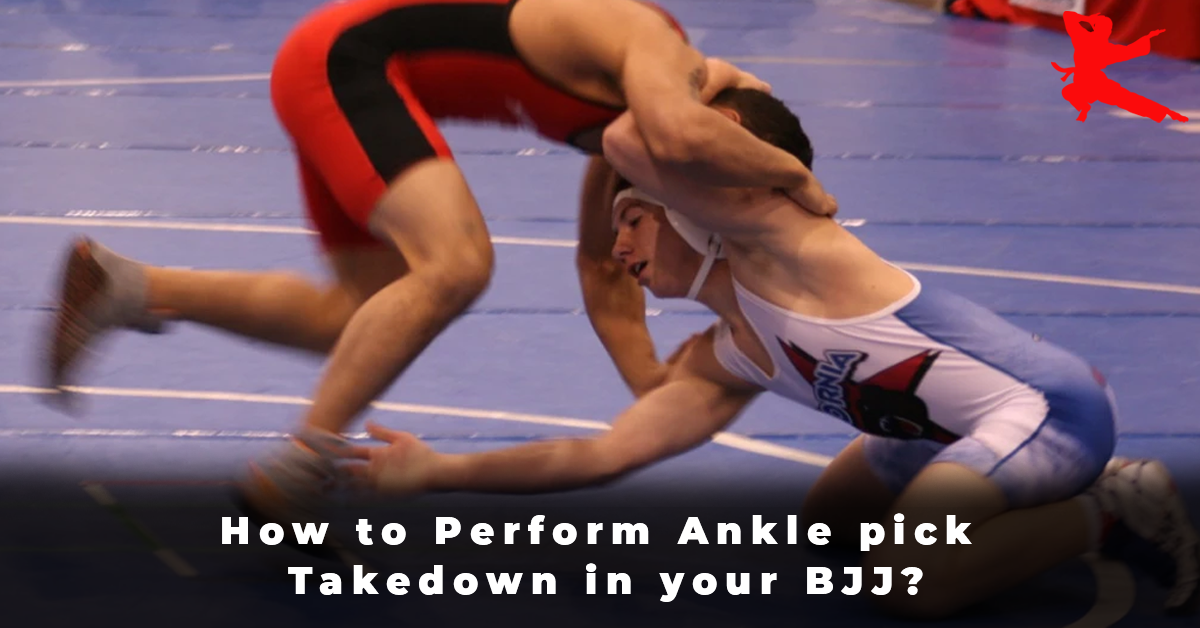 Wrestling ankle picks are among the most dynamic and effective takedowns. The takedown is actually among the most versatile in grappling martial arts. When a grappler grabs an opponent’s ankle and pulls it toward their body, they perform an ankle pick. The goal is to take down the opponent effectively by forcing them into a one-legged stance.

In most cases, the Ankle Pick begins with a tie-up position. By exposing the opponent’s leg with the collar tie, an attack is launched against them.

An attacker uses the collar grip to apply pressure to the opponent’s heels to avoid being pushed down.

Afterward, the attacker will lower himself and place their knee on the same side as they intend to strike. To prevent the headlock, the mind and body must be in good alignment.

To achieve this, the attacker placed a hand behind the ankle and used the collar tie to push the opponent’s head and upper body back.

Pulling the ankle may cause the opponent to fall immediately. If not, continue to drive to finish the takedown. The attacker can often complete a standard single-leg attack, or a double leg attack can be attempted.

The ankle down is a very effective tool in the BJJ, and if you want to try this on your opponent. Then you have to be very careful and make sure that you are doing everything very quickly because if you fail, the opponent can also respond and attack, which might be bad for you.

So, above, we have told you how you can perform this ankle down, but here are some tips for you that should be in your mind when you are performing the ankle down.

It is important to change levels before using the ankle pick if you want to have a high success rate. When grapplers attempt to take down an opponent, some forget this important step. Drop to your knees and go for your ankles as you change levels.

The ankle pick is more effective if you start close to the opponent. Each tie-up has a different purpose, so which one you use depends on your preferences.

Attacking the front leg is the best way to perform an ankle pick. Most often, it’s opposite your clinch/undertaken.

Before taking down your opponent, you must break their posture. They can be taken down if their base is knocked off. If they face away or down, push them down to leave an opening for the takedown.

The attacker should drop their knee toward the target leg. As a result, you are closer to attacking that knee.

As soon as you grasp the ankle, pick the takedown. The fight won’t be over until they’re on the ground. The takedown won’t be secure unless their body is controlled after they fall.

The closer you can get to the leg you want to attack, the better. It will be easier to do the ankle pick if they bring their leg forward.

It is also very similar to the other grappling techniques, but in the ankle down, there is a very low risk that the opponent will respond and attack you with some chokes; that is why it is considered the safest. A different type of ankle pick exists for every grappling style, based on the rules and grips being used.

We are here to teach you about three setups that would help you in your BJJ fights while you apply the ankle pick takedown. Let’s begin the setups:

It is how the Taylor setup is applied to your opponent.

In BJJ, a fake guard pull is used to incorporate the ankle pick into a chain of techniques that include a fake guard pick. Many competitors anticipate that their opponents will pull guard, so this move is an advantage. Starting with a grip of the Gi, we begin this fake guard pull to an ankle pick. When he raises his foot in this manner, it appears as if the attacker is trying to pull back a guard.

When the opponent anticipates the guard pull, they usually plant their weight forwards. The attacker now attempts to pick his ankle. The participants try to drive into the opponent while pulling the ankle backward with the previously established gi grip. There are many videos on youtube where you can learn this technique.

As with this method, Taylor utilizes wrist control and a collar tie on the inside of the collar. While you circle to the collar tie side, you pull their wrist so they can step forward. Grab their foot and drive on to take them down. The method’s application depends on how you implement it.

As we said in the article, that the angle pick takedown is very effective in the BJJ, and you can perform it very easily with low risk. If you are a student and don’t know how you can apply it, don’t worry; we have created a step-by-step tutorial to perform it easily.

What’s an ankle pick?
The ankle pick has been used in wrestling, BJJ, and Judo for many years as a takedown technique. It occurs when you push your opponent’s torso and upper body in the opposite direction while pulling their ankle and leg in one direction and using the other arm to pull their leg and ankle.
What is a takedown technique?
Takedowns refer to martial arts and combat sports techniques that involve off-balancing an opponent and falling them to the ground as the attacker stands on top. To shoot for a takedown or simply shoot is to advance on an opponent and attempt a takedown rapidly.
Can you use ankle pick in BJJ?
Yes, many practitioners use the ankle pick in Brazilian Jiu-Jitsu. It is a very effective technique, and it is adopted from Judo and wrestling, and you can apply it to your opponent. The best thing about this technique is that it is straightforward to apply and a low-risk technique.
Are heel hooks allowed in UFC?
Yes, heel hooks are allowed in the UFC, and pretty much everything is allowed in the UFC. Only the 12-6 is banned because it can do severe damages.