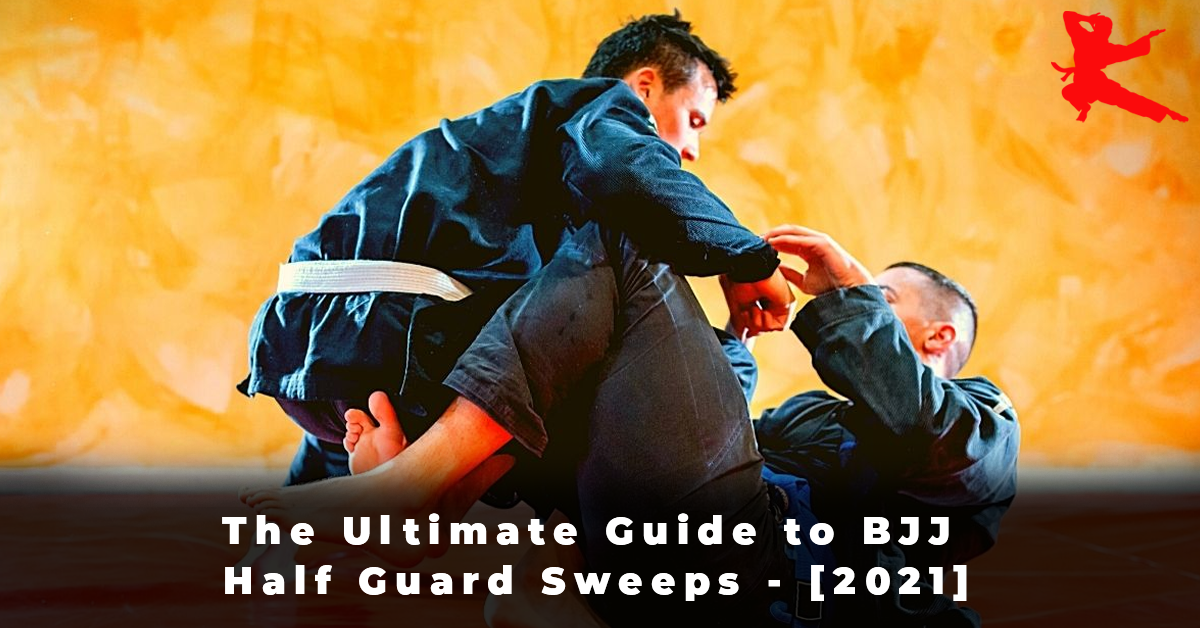 BJJ is one of the most interesting and popular sports in the US, and many young people inspire to be BJJ practitioners and have many heroes to look upon that have made their names in the BJJ. Many parents support their children to pursue their careers in the BJJ because they know that it would make them emotionally and mentally strong.

It is a very good skill if you are a bit skinny. After learning the techniques of BJJ, you can easily knock down some big bullies that are trying to tease you, so; this is some reason now people want their children to learn the BJJ whether it is for their profession or their defense.

There are many techniques in the BJJ that are famous, and if you are into BJJ, then you might learn today we are going to learn about the technique called Half Guard, which is a very effective technique, but as a newbie, you might not know what is this so, let’s find out what is the Half Guard sweeps.

Throughout your jiu-jitsu career, the half guard is likely to be your most common position. The majority of players, however, concentrate their efforts on positions that are much harder to achieve, like the back, the mount, or side control. What are the benefits of a half guard? You see, some people don’t want to walk straight into your closed gate!

As early as my judo days in the late 90s, I used to use the half guard. Over time, I’ve witnessed the position evolve from predominantly defensive “last-ditch” play to one offensively sophisticated. We’ve put together a few tricks and tips for starting with the half guard.

You can warm up before this drill by doing some jiu-jitsu instead of, for example, running around in circles or doing pushups or doing a lot of repetitions of basic half-guard back-takes.

My students warm up with this drill when they are in my classes. You will use a movement when you are a white belt until you are a black belt, so it should become second nature to you on both sides, as far as possible.

Both partners are to be conditioned a bit here. Jiu-jitsu’s cardinal sin takes someone’s back, but turning in toward their opponent becomes a sweep rather than a submission. It’s a gold mine.

Concepts behind Half Guard Technique

First, it is important to learn three concepts universally considered fundamental by all students when learning the half guard from the bottom. The rule of exceptions always exists, and half guard can be played in many different ways, but I find this method the most effective. In general, we consider this to be the best method for getting started at the position. These are the three main concepts:

This approach is not very common among BJJ players, but I believe this is the easiest way to apply the half guard technique, especially when you are a beginner.

Basic Half Guard Back Take

By pushing their hindquarters, you can off-balance your opponent. Either you will go backward or forward as a result. You will either achieve the same result or provide plenty of opportunities to climb “out the back door” and onto your opponent’s back.

The previous one was the basic back take, and now we will cover the advanced back take. It is not uncommon for your opponent to refuse to allow you to put your second hook into the ground when you come up from the bottom. Getting to your opponent’s back from half guard is nice since you already have a hook in place.

The second technique involves reaching into the “inside space” (the area between those armpits and hips) and using the leverage therein to pull them on top of you rather than coming up from the bottom as in the first. It is the easiest way to go in the matches, even when you have purple, brown, and black belts in the opposition.

If you follow the guide, you can learn to apply the half guard sweep, which is a very good technique to learn. If you found our article informational, don’t forget to share it with your friends and family members.

How do you get into deep half guard?
A smaller BJJ competitor can use this slightly advanced position to neutralize a much bigger opponent by keeping their weight off of you. It is a great position to occupy if the opponent is behind you; for example, it allows you to enter from an utterly defensive position. When played well, deep half can quickly change your opponent’s fortunes, enabling you to go from a terrible position to a perfect one.
What is a half sweep?
Getting into the half guard position (or half mount) involves the bottom combatant having one leg entangled in the top combatant’s leg. Half guard is sometimes used to describe the bottom combatant, while half mount means the top combatant.
Is Z guard good for MMA?
Z guard is suitable for use in MMA. It is also called the 93 guards, shin shield, or most of the guards, depending on which Brazilian jiu-jitsu tournament you attend, commonly Z guard. Hence, MMA players typically use this guard to avoid taking damage, break the engagement, and get to their feet quickly.
Is Deep Half Guard effective?
In every discipline of BJJ, the deep half guard is a very important position. Half guards have been tried and tested at every belt level, Gi or No-Gi, and are very effective in forcing someone to submit, sweep, or control them. So, it does not matter if you are a beginner or expert the half guard is very effective if you know how to apply it correctly.