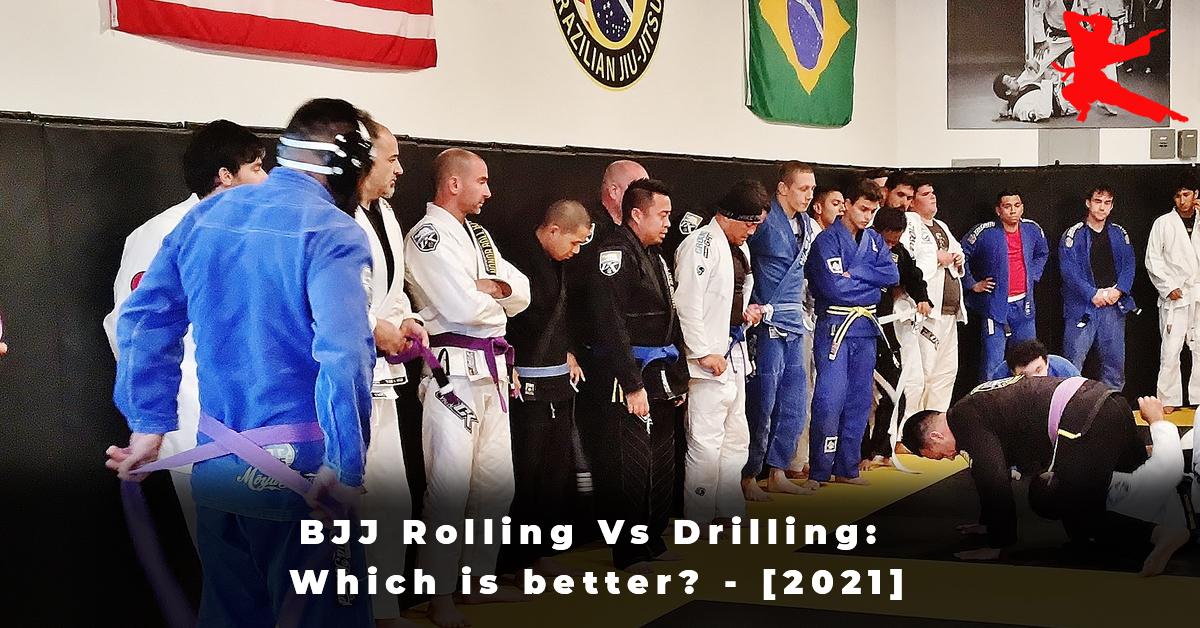 Rolling vs drilling is one of the most consistent debates in modern BJJ. How BJJ Works defines rolling as, “an all-encompassing term for sparring or drilling at varying degrees of intensity.”

In case you didn’t know, drilling makes a move. In most classes, the time spent rolling and drilling is usually around 50/50. However, some professional BJJ fighters have different opinions about how much to drill compared to rolling.

So there’s no clear-cut answer. They are both very important to your training and practice. So let me break down how I view these two things.

Drilling is about the brain. It’s when we learn new techniques. It’s when we set patterns and learn sequences. This is the time to talk, reflect, and ask questions. If there is something you don’t understand, we’ll use practice time to figure out where you’re having problems and how to fix them.

For newer students, more time should be spent drilling than rolling at least starting out. That doesn’t mean you shouldn’t be rolling at all, but you have to learn the moves before you’re going to be successful in a roll.

Rolling is a live application for what you’ve learned. This is where you take the things that you’ve been practicing, the new techniques you’ve been drilling, and seeing if you can actually use them. Rolling is the time that you should feel things, not think things.

You develop your instincts and muscle memory, those neural pathways that automatically go from the stimulus to the spinal cord without having to travel to the brain and back. You don’t have time to think. These movements become immediate and deeply rooted.

It also forces you to learn the right timing and rhythm of the movements that you are learning because the rolling is dynamic. It’s changing and you can’t plan what to do next. And dynamic movement and thought processes are important to your general health, not just your Jiu-Jitsu practice.

Even if a roll doesn’t go the way you hope, set it aside. If you can’t work out the problem during the roll, keep going and see what happens. When you’re done rolling, start thinking about what went wrong. Was it timing? Rhythm? Distancing? Maybe you just need to drill the technique more because you don’t have it down as well as you thought.

Rolling Vs Drilling: Which is better?

Fundamentally, if you are not pushing yourself with either your rolling or drilling then you are not training properly. You will not progress.

Rolling (or “sparring” by another name) can make you tougher. It allows you to see if you know your stuff. Drilling improves your technical knowledge. It can give you both the building blocks to develop a technique and then fine-tune it.

This chart explains some ways one can view rolling vs drilling in BJJ:

For a brand new student, I could say you want to drill more. You’re still learning the basic moves, the rules, and the foundation of BJJ. If you try to tackle those abstract concepts before having a concrete foundation, you’re never going to understand it.

As you build a foundation, you can start to take that knowledge and grow it into the more abstract concepts that happen in real-life applications. So you start to roll more and more. You drill a little to learn something new and you roll a lot to reinforce it. For the most experienced, you might never have to drill again.

So the short answer is that you need them both. Examine where you are in your own practice and which is benefiting you more. Whichever it is, that’s what you should be doing more of until your knowledge and practice expand more. Learning is a constant cycle if you’re doing it right.

How often should I roll BJJ?
If you want to get good at BJJ, then you will need to train consistently. You’ll make better progress training once a week, every week, for a year than you would train several times a week for two weeks and then taking a few months off.
Why is BJJ so addictive?
Along with that, the pain causes you to release norepinephrine (adrenaline) and other mind-numbing chemicals. These can also lead to a sort of addiction to that feeling of intensity, yet calm. The combination of all of that together can make BJJ incredibly physiologically addicting, very quickly.
How long does it take to get 1 stripe in BJJ?
On average it can take 3-6 months before you’re ready to receive your first white belt stripe in BJJ. Some schools give out stripes based on how long the individual has trained. For instance, every 4-6 months they get their next stripe. Other schools prefer the student to know a handful of basic techniques
How important is drilling in BJJ?
Drilling is important to practice techniques in a controlled, methodical, deliberate way to ensure precise, effective technique. A well-drilled technique will have a higher rate of success and will have a higher chance of being executed. Drilling techniques will help you make them more effective and efficient. It can fix holes or gaps in your techniques that may be preventing them from being effective.
Will Jiu-Jitsu gets you ripped?
The simple answer is that BJJ is a good workout and can be a tool for helping you get lean and muscular. However, without a good diet and workout plan, BJJ alone is not likely going to get you ripped like Gordon Ryan or Andre Galvao.