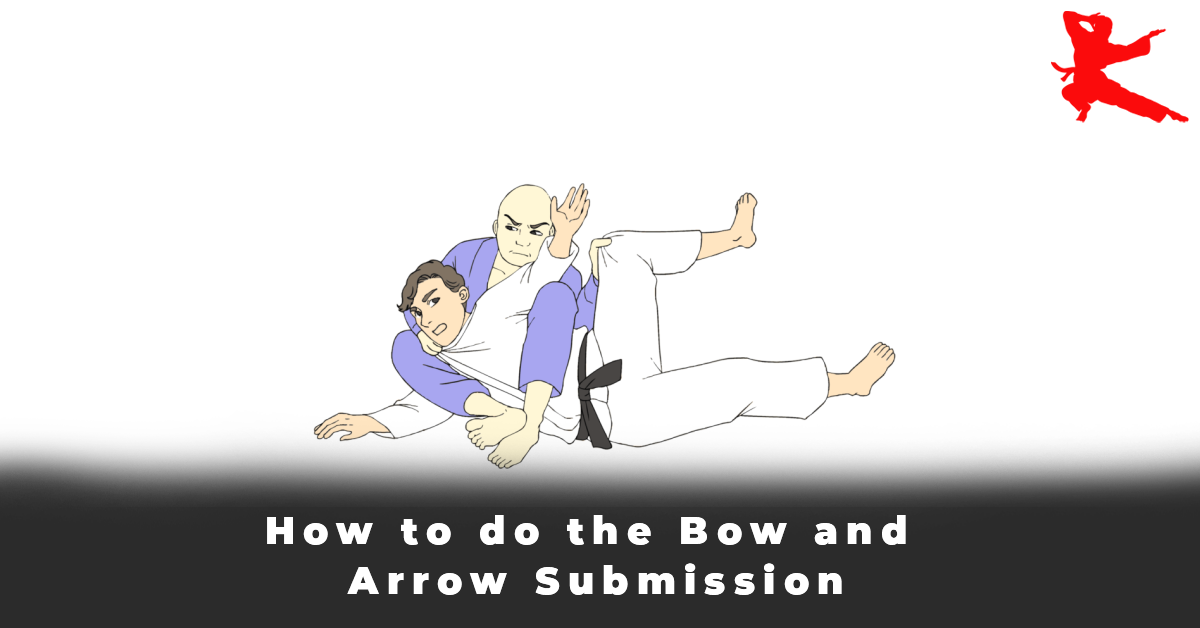 The Bow and Arrow Choke, also known as the ‘Berimbau’ choke (in Portuguese/Brazilian) is a highly effective choking technique that relies on the attacker grabbing one of his opponent’s collars from a back control type situation and the free arm controlling the closest leg (i.e. left hand under the opponent’s chin with a grip on his right side collar and opposite arm grabbing opponent’s right leg).

Although we could not establish the origin of the name in our research, the designation clearly relates to the angle between both grapplers as well as the bend in the body of the athlete being submitted when the position occurs – which resembles that of a bow in relation with the arrow, before getting propelled into its target.

The Bow and Arrow Choke is one of the cornerstones that is taught in Jiu-Jitsu classes. Sometimes it can be difficult to finish, especially if your opponent falls on your leg as you go to complete it.

In this article, I have mentioned some details about this Bow and Arrow Choke that will gain your knowledge.

What is the Bow and Arrow Submission?

The Bow and Arrow choke is one of the tightest lapel chokes in grappling. Once someone grabs a hold of the lapel and turns and angle it is lights out in seconds. If a grappler is good at it, you have to tap immediately or you will go to sleep.

This is one of the most high-percentage chokes in Jiu-Jitsu. Once the grips are set by the attacker,
it is extremely difficult for the defender to wriggle out of this choke. When this choke is being performed properly, it not only blocks the carotid arteries, it also twists and stretches the defender’s body, neutralizing the defender’s hips and killing spine flexibility.

As you can see from the diagram

Important details for the attacker

This choke isn’t just about how hard you can pull with your arms. To finish this choke properly, you should be pulling with both arms while also pushing hard against the defender’s body with both legs. Focus on elongating your spine so that you engage the muscles in your entire body in pushing and pulling.

This falls into the same category as pinching the opponent, for example, because it is painful but doesn’t actually accomplish a submission. In a tournament, this would rarely result in a tap. If the defender taps, you didn’t submit them as much as make them grow tired of dealing with the position.

Make sure you have control in three locations of the defender.

Important details for the defender

This choke gets progressively more difficult to defend as the attacker gains his or her control points. Do not wait to begin setting up your escape route.

Before the attacker can get their leg over your shoulder, use your bottom hand to grab the wrist of the choking hand and pull it as hard as you can. Even if you can’t move their arm, it is beneficial to keep this constant pressure here.

Keep your hips up

Again, before the attacker achieves all of their control points, make sure that you keep your hips active by keeping them off the floor. The best practice here is to keep your heels as close to your hips as you can get them, and stay on your tiptoes. If you are flat on your butt, you have no power in reserve to make a move when the timing is right. Active hips and legs provide on-demand power and mobility.

If you have followed all of the details above, then you will have the opportunity to escape when the attacker attempts to lean back to start taking the choke.

3 Variations of the Bow and Arrow Submission

One variation of the Bow and Arrow choke is from side control. You can do this one when you take a lapel grip and they turn away to escape. Just place your knee behind your back/neck and crank to get the submission. (Don’t forget to grab the pants.)

The next variation is for when they defend the choke by grabbing the lapel. This just stalls the choke, so do this method to counter their defense.

Hook your leg around their grip and the other leg on top of that one making an x. Press down with your legs and pull the lapel to finish the choke.

This variation is for when you can’t hook their arm with your outside leg due to something like wide shoulders. So, what you’re going to do instead is bring your inside leg over and behind their head.

These are all great ways to finish the Bow and Arrow if the traditional method isn’t working!

This bow and arrow choke is the best gi-based attack. Even though there are a lot more, some easier to pull off, some harder, the bow & arrow has never let us down.

When you lock this choke in, you rarely have an opponent escape it. It works and it works for good reason. If you are looking to learn and play around with more gi-based attacks, this is a choke to drill and practice. You will be able to apply it as well!

What is the anaconda choke?
The anaconda choke is an extremely tight choke that every grappler must know to have a complete game. Since being introduced into BJJ it has proven to be one of the most effective front headlock chokes.
Why is it called the Ezekiel choke?
The name of this chokehold comes from a famous Brazilian judo Olympian by the name of Ezequiel Paraguassú, who in 1988 decided to tighten up his groundwork (new) ahead of the Seoul Olympics at the Carlson Gracie Academy.
How does Ezekiel choke work?
The Ezekiel Choker Estrangulamento de Ezequiel (in Portuguese) or even Sode Guruma Jime (in Japanese) is a common submission utilized by grapplers in which the attacker uses his own gi/kimono sleeve as leverage to choke his opponent.