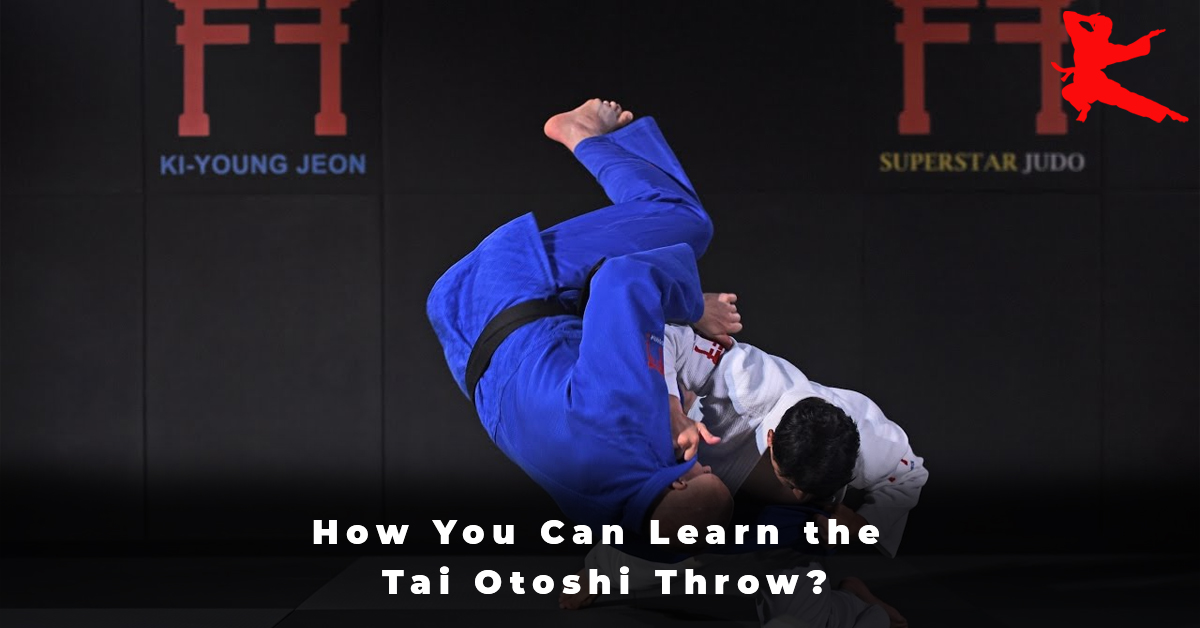 If you are interested in Judo and see the match of Judo fighting then you might have seen that sometimes one player came in front of the other player, expand his legs, and throw him on the ground by utilizing its weight. This is a very deadly and important throw in Judo and if you apply it properly it can be a winning throw for you.

This is also a very good technique for self-defense too because if someone grabs you from the back and tries to establish a grip on you then you might have a chance that you can apply the Tai Otoshi technique on him and throw him on the ground. It is a complicated throw but if you follow our article then after the end of this article you can easily apply this throw.

Then after doing these things now your opponent will try to grip you from the back here comes the main component of this technique from one handhold his elbow firmly and on the other hand, hold his collar you need to grab the collar very firmly. Now after this point it depends on your decision-making that when you think about the time to apply the throw.

But one thing that we would recommend you is that don’t think for much time try to apply it as soon as possible because the more you think more your opponent has time to recover from your grip. As you are familiar with the other techniques of Judo in this technique too you have to use your hip as the pivot to throw your opponent down.

The main thing on which you should work on is the foot works because The faster your products would be the faster you will be able to throw this technique.  The one thing that you should do in this technique is to come in front of your opponent and you have to hold your opponent very firmly and you have to use your hip and back as the pivot to throw him on the ground.

However, the main thing in this technique is the time because the faster you apply it the lesser time your opponent has to resist again in your grip and the last thing is when you are applying the technique make sure to use your feet because that would also help you to complete your attack more smoothly and you will see your opponent on the ground.

If you are still confused that how can you apply this throw then you can watch the video below.

Now the technique is going towards its ends you know now that how important is the footwork and you are also in the right position to apply the Tai Otoshi then you need to twist your opponent and make sure that he falls on the ground now there are more than two techniques to apply the twist.

The first way is to apply from the leg that is in front of him you can put that leg in front of his leg and then apply the technique it would not give him the chance to resist and also he will be on you when you are bending in front of him and your front leg is hitting on this leg it would make it very easy for you to apply this throw.

The other way is to bend the other leg which is on the other side of your opponent and then twist him on the floor. Both techniques are good but it depends on the situation that which one suits your opponent and put him on the ground. But the most important thing that you should look for applying this technique is your weight and speed because it can be failed if you do any tiny thing wrong.

There are some problems with this technique too like all the other techniques of Judo and if you are someone who is a newbie to this technique then you should apply it very carefully because if it goes wrong it can be very fatal for you. There are many chances that if the opponent resists and loses grip then the Tai Otoshi can be very easily encountered with another technique which is called Tani Otoshi.

The other thing in this technique is that you might end up hurting your leg and this happens in those cases when you can’t manage the weight of your opponent so, instead of your opponent you get hurt with your technique so, our safety is also compromised in this throw.

This technique is only possible to perform in Judo because you need to grab the gi with your full force and it is not possible with some other kind of fighting like MMA. I have heard somewhere that it can also be very helpful in self-defense this is bullshit because you can grab someone with the collar that firmly there are many chances that his shirt of clothes he is wearing would tear and your grip would lose.

This is one of the great techniques of Judo which is called the Tai Otoshi and it is not very easy to apply if you are a newbie and you need to practice and improve your footwork to apply this technique correctly. There are some issues that you should also know that if you miss a little thing or your grip is not firm then your opponent can change it into the Tani Otoshi which is the encounter technique of Tai Otoshi.

This technique is only for Judo and you can’t apply it to some other martial arts like the BJJ and others because you would need your opponent to wear the gi so, you can hold it firmly and apply the twist with your back and throw him on the ground but in real life, it is not a good idea to apply this technique.

What does Tai Otoshi mean in Japanese?
The meaning of the Tai Otoshi in Japanese is the one knee body drop and it is also included in the 40 throws of Judo and it is also from the 67 throws in the Kodokan. It is one of the most useful techniques of Judo to throw your opponent on the ground by hand techniques.
How do you do Tai Otoshi?
It Is a very simple technique to apply but if you learn it properly. In this technique, you came in front of your opponent hold his elbow and collar with both hands firmly. Now twist your back and throw him on the ground. This is a very exclusive technique that you can only apply in Judo.
Is Tani Otoshi dangerous?
Yes, there are many chances that in the Tani Otoshi you might end up injuring yourself or your opposite person because if your fail to apply the technique then because of your full weight the leg of your opponent will injure. But many people apply this Tani Otoshi safely and you can also follow their methods and lower the chances of injuries.
Is Tani Otoshi banned?
The meaning of Tani Otoshi in Japanese is the valley drop and in this technique, you put your legs behind the legs of your opponent by holding him firmly this technique is also used to counter the Tai Otoshi. But is one of those three techniques that are banned by the famed blue basement because they are dangerous and can be very deadly.