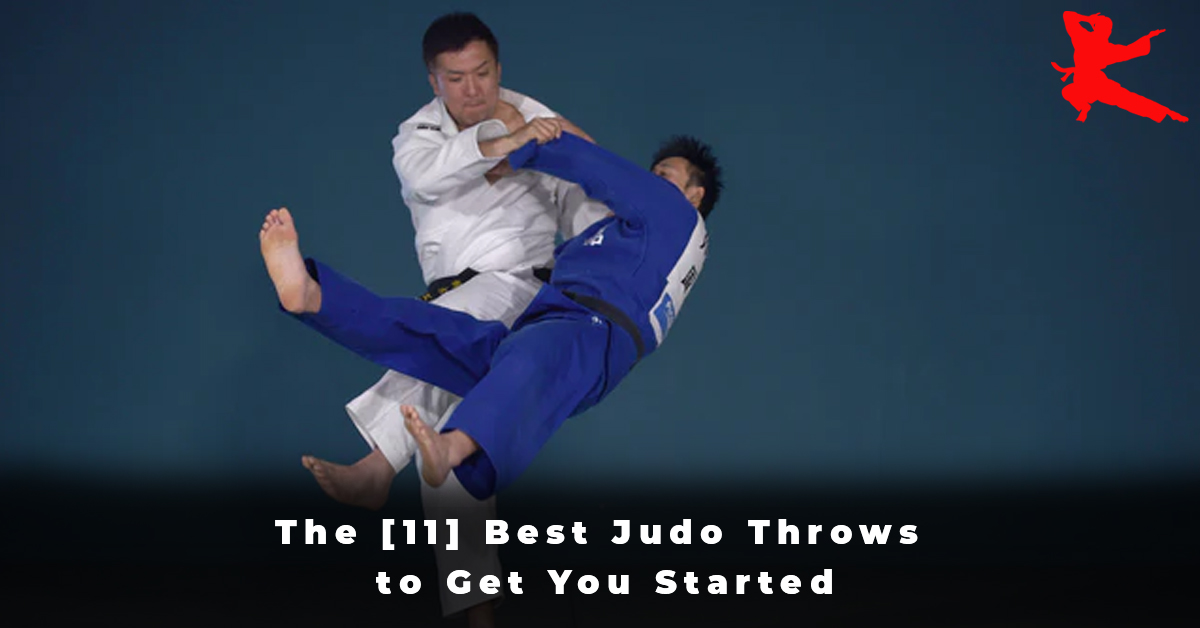 When learning Judo throws, Shuai Chiao throws, Wrestling, or any kind of throwing arts, Ukemi or break falling is one of the first skills you learn. The ability to fall gracefully and with control is a daunting task but achievable with constant practice.

When learning Judo throws, you want to be very comfortable being thrown. Without this confidence in their ability to fall, you will not try to take offense in a competitive situation.

Instead, you might hesitate and most often get defeated in competition. Judo throws are extremely common in mixed martial arts and for good reason. But that reason isn’t necessarily clear.

We see the highest level athletes still use them consistently, and former champions like Ronda Rousey made them a trademark of her game.

In our opinion, the following judo throws are great for BJJ. They are easy to learn with simple mechanics.  They also have a (relatively) low risk and high reward application in BJJ.

11 Judo Throws to Get You Started

These are taught to students in sequence. Here are some basic judo throws and judo moves that will help you master your art while having a lot of fun.

Often, this is the first throw you will learn in a judo club. And rightfully so. After all, it’s easy to do regardless of body type and is especially effective if someone is just standing there without defending themselves against it.

In judo, that would be an ippon or full score and you’d be the winner. In BJJ – the IBJJF at least – you would score 2 points and land in either a headlock or knee-on-belly.

And in a streetfight on concrete and an opponent unfamiliar with how to land on the ground, well let’s just say that a throw like this can often end the fight entirely.

The minor outer hook, or Ko Soto Gake, has played a big part in the growth of Brazilian jiu-jitsu.

Early on, it was a go-to throw in mixed martial arts. When used against an opponent with a striking background, it allowed a jiujitsu fighter to get a fight to the ground without suffering any damage in the process.

Often, people in jiu-jitsu matches stand bent over with their legs wide apart. You see it a lot because people plan to pull guard, but it leaves you wide open for many different throws.

O-Ouchi-Gari, or the major inner reap, might be one of the most effective throws to use against an opponent in this position.

A favorite of many in competition, this throw is especially good against someone stronger than you. Utilizing a faster technique, this move is a cornerstone of judo.

Very similar to the Uki Goshi, this throw is even more impressive. A must-have for any Judoka, this is a hip toss like its counterpart.

This technique has been banned in some countries due to the risk of a neck injury but is still a must for any beginning Judoka.

Doing De Ashi Barai, or the advanced foot sweep is all about proper timing. When is the best time? When your opponent is standing upright and has not bent over.

In case you haven’t noticed, pulling guard has become very popular in sport jiu-jitsu; so much so, you can see entire divisions go by without anyone doing a throw.

After all, throwing can be a risky business, and sometimes it’s better to play it safe, sit down and go straight to your guard; where you’re very comfortable.

But imagine if there was a way to pull guard and throw your opponent immediately. Now imagine no more. It’s called Tomoe Nage, and it works very well in jiu-jitsu (as long as you do it before your opponent pulls guard).

And here’s why it’s a good move for BJJ. Even if you don’t get the throw, you’ve landed in your open guard which, as we said earlier, is somewhere you feel very comfortable anyway.

In some ways, Sumi Gaeshi is like Tomoe Nage. It’s a sacrifice throw that has you sitting down and doing a backward roll to come up on top of your opponent who’s just done a forward roll against their will and to their dismay. But that’s about where the similarities end.

This is one of my very favorite throws, and here’s a video of me teaching it as a safe and effective way to get the match to the ground in a BJJ context:

The hip throw, or O Goshi, isn’t seen so much in sport jiu-jitsu, as it’s fairly easy to defend against by just keeping your own hips away from those of your opponent.

The shoulder throw has only recently begun making an appearance in sport jiu-jitsu. For years, no one did it so much as it involves turning your back to your opponent.

These days, though, we’re starting to see it. Especially among heavier black belts who are less likely to start a match by pulling guard.

Saulo Ribeiro has recently made the shoulder throw his takedown of choice. Or, at least, he’s doing it to all his opponents.

While Seoi Nage takes time to perfect, it’s a throw worth knowing. Even if you have no plans to use it, you’re best off knowing it just so you can defend against being thrown into orbit

Like BJJ, Judo throws will rarely work in isolation so they should be chained with other moves to make them work. It is a fairly low percentage having only one move and being overly reliant on it. With this said, it’s good to learn at least a couple of moves from this list to make them work more successfully.
It should also be added that with Judo, grips are vitally important.

There’s no point trying throws without establishing dominant grips, to begin with. Your grips should be used to control and isolate your opponent, so being aggressive is often advised too.

What is the hardest judo throw?
Tai otoshi is a hand throw that should generate a lot of power with very little contact. It can create one of the hardest falls in judo, yet it relies on timing and kuzushi rather than lifting. The power comes from a fast rotating action that drives uke right into the mat.
What is the throw-in player known in judo?
Before explaining Judo’s basics, you need to learn two things. Tori is the person who performs the throw, and uke is the person who is being thrown.
Which martial art has the best throws?
There are several major types of throws, among Asian martial arts, Judo has the most developed throwing techniques and throws are considered its specialty.
Can I teach myself judo?
Teaching yourself judo is not recommended, and it is likely that you will not learn it well. Judo is a martial art, and if you try to learn it with a partner, who is also a beginner, chances are high that one of you can get badly injured.