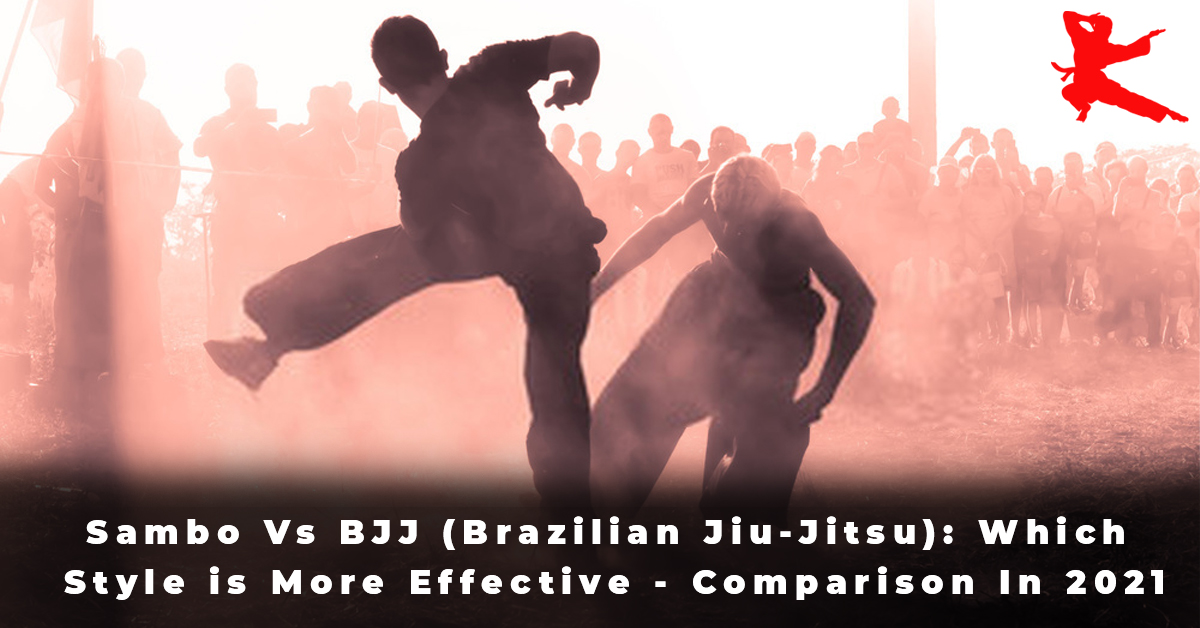 The Russian Sambo and the Brazilian Jiu-Jitsu (BJJ) are equally menacing as self-defense art forms, through their key attributes. Both the approaches blend in ground-control techniques, with brutal take-downs and joint locks.

BJJ is uniquely a martial art in which practitioners mainly fight with various guards on the ground. Sambo is a grip martial art (usually referred to as sports sambo) and a system of mixed martial arts known as combat sambo. Both arts have strong and mixed sports. Martial Arts Applications (MMA) with UFC champions hailing from both disciplines.

Sambo is an aggressive fighting style from Russian that focuses on quick striking paramilitary techniques. BJJ is a popular fighting style focusing on strong groundwork and chokeholds, designed more for ring competition than street fighting. This makes it harder to use in practical applications.

Many fighters from Eastern Europe and Russian states that specialize in Sambo have been dominant in the UFC and Bellator. It leaves folk to ask the question, which is the superior combat martial art – is it Russian Combat Sambo or is it Brazilian Jiu-Jitsu?

Let’s take a look at how BJJ and Sambo differ from one another. We’ll detail everything about each martial art and see which is best for you.

Here’s a quick history lesson. BJJ was developed in Brazil in the early 1900s. Students of the judo creator Jigoro Kano came to Brazil to teach the art of judo, in particular Mitsuyo Maeda, Geo Omor, and Yoshihiro Satake.

The students of these judo masters included Carlos Gracie, Helio Gracie, and Luiz Franca who would create the art of BJJ. It was derived from judo and focused more on fighting on the ground than on throwing.  Jiu-Jitsu has come a long way in a short period of time and has become one of the most practiced martial arts in the world.

Like BJJ, sambo was derived from judo. Vasili Oshechepkov was a martial artist from the USSR who traveled to Japan to learn judo directly from Jigoro Kano. He then received a second-degree black belt from Master Kano.

Oshechepkov recovered from what he had learned in Japan and with the help of others, they began to develop a new martial art. What he helped create became known as the art of sambo. But just what is sambo and what does it mean?

The Russian word sambo directly means “unarmed self-defense” and the correct official spelling is “combo”. This grappling art is a mixture of judo and wrestling and the national martial art of Russia. It was developed around the same time as BJJ in Brazil in the early 1920s.

Today Sambo is a globally recognized form of amateur wrestling and practiced by many top MMA fighters. These include Fedor Emelianenko and the current undefeated UFC lightweight champion Khabib Nurmagomedov.

The key differences between BJJ and Sambo

The first major difference between Brazilian Jiu-Jitsu and Sambo is that BJJ allows practitioners to perform joint locks and strangleholds, while sports sambo only allows arm and leg joint locks. However, combat sambo also allows chokeholds.

The points are also rated differently in BJJ and Sport-Sambo. In BJJ, points are scored for different positions or maneuvers, and in sports, sambo throws earn different numbers of points depending on who performed the throw, position, and more. Points can also be earned in sports sambo for hold-downs. Combat sambo also awards points for strikes.

In the fight against sambo, a practitioner can also win instantly by eliminating his opponent or successfully knocking him down twice.

The competitive rules and points scoring systems of Sambo and Brazilian Jiu-Jitsu are mostly different. The one major commonality is that a successful submission by a practitioner signals instant victory.

The major difference between the rules of Sambo and Brazilian Jiu-Jitsu is that in Sambo “total victory” can be had if a competitor carries out a perfect throw, has an 8 or more point advantage, or in the case of Combat Sambo, knocks their opponent out. Here are the main rules for each martial art:

Some BJJ rules are “submission-only” which means that no points are scored and games can only be won if one athlete successfully submits the other. Others like the Abu Dhabi Combat Club (ADCC) are hybrids between the two and are effectively submission-only matches for the first half of the match, after which points can be scored.

The FIAS Sports Sambo rules are quite different from BJJ rules. They include:

Combat Sambo rules differ again from sports Sambo due to the addition of strikes and chokeholds. The general rules are:

Check More: BJJ vs Wrestling – What Makes These Martial Arts Different from Each Other?

Brazilian Jiu-Jitsu and Sambo both have belt ranking systems, with Sambo’s being recently introduced in 2020 by the FIAS.

In Brazilian Jiu-Jitsu, the adult belt system includes eight belts, from a white belt all the way up to a red belt. The belts are:

The belts also have stripes or titles that students can earn, either through formal degrees or over time, as instructors feel their students are ready.

To get your next belt, you may need to formally grade for it, or you may just need to keep progressing with your learning until your instructor thinks you’re ready. Schools and instructors can treat this differently.

In 2018 the International Sambo Federation (FIAS) announced that it would introduce a color belt system for Sambo similar to other martial arts. In 2020 the belt system was approved. It’s a seven belt system that awards a new color for each year of Sambo’s study. The Sambo belt system includes the following ranks:

Check this: Judo vs Jiu-Jitsu – Detail Comparison Which is Better

A typical BJJ class consists of the following

Brazilian Jiu-Jitsu and Sambo have some similarities when it comes to clothing and equipment. The gi jacket used in BJJ is similar to the kurta jacket used in Sambo. The key difference is that the shoulders of the kurta have extra fabric which is used by athletes to throw their opponents.

In BJJ, the uniform that is worn most of the time is the gi or kimono. This is a durable cotton jacket and pants with a cotton belt that indicates the rank. In addition, most practitioners will wear a mouthguard when sparring to protect their teeth.

Which is more popular, BJJ or Sambo?

There’s no definitive way to prove which martial art is the most popular, but we can use data like Google Trends to give us an estimate. As you can see below, the Brazilian Jiu-Jitsu (blue) based on Google Trends data for the past five years) is much more interested in Google than Sambo (red):

While Brazilian Jiu-Jitsu is arguably more popular globally, Sambo enjoys a high level of popularity in Russia and surrounding countries:

It is important to note that sambo is also provisionally recognized by the International Olympic Committee and is actively trying to become an Olympic sport, while Brazilian jiu-jitsu does not currently enjoy the same status.

BJJ does have the Sports Jiu-Jitsu Federation (SJJIF) which wants to get Brazilian Jiu-Jitsu into the Olympics, but at the time of writing, no major progress has been made.

Which One Is Better For Self-Defense?

Russian sambo has greater potential as a practical approach to self-defense. With its aggressive takedowns and attacks, as well as claws and leg locks for self-defense, it’s an impressive discipline.

The explosiveness of military combat sambo style can throw an enemy and stun them before facing their ultimate defeat. The Brazilian Jiu-Jitsu as a self-defense martial art is well suited for smaller or weaker fighters who can bring the fight to the ground.

Through methodical movements, a BJJ fighter can achieve positional dominance by keeping an eye on the opponent’s weakness. However, it is more suitable for opponents in the ring than in the real world.

By now, in this article, you’ve learned pretty much all the basics there is to know about these two fighting disciplines. So how do you choose which grappling martial art is the right discipline for you?

If you’re trying to build up your repertoire of moves for MMA sparring and competition, you’ll be best served to cross-train in multiple fighting disciplines to have the largest toolbox at your disposal when it comes time to hit the ring.

Even if you really want to take sambo training, unless you’re in a place with a large Eastern European population, chances are you might have to travel pretty far to find any sambo gym, much less a choice of several to pick from. So that means you might end up having to fall back on BJJ whether you want to learn sambo or not.

At the end of the day, sambo is a great martial art to learn if you have access to it, and if you know of a sambo gym nearby, you’d be doing yourself a favor to check it out and see what kind of training is available. But if you’re stuck with BJJ as a backup (or simply prefer it), then you’re in luck—BJJ is still considered one of the best martial arts to start your training in MMA fighting styles.

Is Sambo better than BJJ?
Yeah, Sambo is better than Bjj. Sambo is very different than BJJ. In Sambo, we have a point scoring system and unlike Judo to get what they call an Ippon we have to throw our opponents and remain standing, just like you should in a real fight! We do not go to the ground unless it suits us. We control the fight wherever we like. When it comes to the groundwork, we want quick and devastating finishes, and we go for major limbs like the arms and legs. In fact, our leg locks are scary. We train them all the time, passing guard is not for our art. Why would we need to pass guard when we can take a leg and make it our own? And for those that want to test themselves, we even have Combat Sambo, a full-contact version of our sport that even allows us to headbutt our opponents. Check out our sport in action!
Is Combat Sambo effective?
The Sambo style utilizes a lot of effective takedowns from judo and wrestling. The big advantage is that Sambo is a lot less limited, compared to the mentioned martial arts. A huge variation of submissions, like leglocks, puts Sambo’s style on par with BJJ. In fact, Combat Sambo, complemented with striking, gives Sambo effectiveness both on the street and at a sports level. In conclusion, it is safe to say that Sambo’s effectiveness originates from the way it was created. Simply taking the best from other grappling martial arts made Sambo the effective grappling sport that it is.
Which is better Jiu-Jitsu or wrestling?
If you’re more interested in pushing your body to its physical limit, you may prefer wrestling. If you’re more interested in the technical side of martial arts, and of real-world self-defense, it’s our opinion that Jiu-Jitsu is a stronger option.
Is BJJ violent?
BJJ training is not violent. In fact, it’s quite the opposite. The training is challenging. It teaches you the discipline necessary to get better at things. It teaches you about yourself and is one of the best stress relievers. In fact, many BJJ practitioners often say it’s amazing and just good for the soul.